Hey. Both. It responds with 0.5sec delay, starting torque from 0rpm like 50% of the sport mode. No way to wheelie in high mode at my current gearing.
Top

Sport mode is all that i want then

Hoping for a solution.... The moment I have fixed my battery, i´m going to se if i can replicate the "problem"
Top

SilentEnduro, I have some piece of firmware from qs for the can version (sp) they sent me by mistake, btw before they sent me the one that burnt my 1st votol [; So if you want to try, let me know. But I don't know what it really is and what the differences are, so it may be even more risky than the shunt mod.
Top

So what is your conclusion ?? You are using different motors between the two controllers. But to me the "votol" setup looks more powerfull ?? But I could be mistanken...

It’s unexpected if it’s just based on a theoretic algorithm. That would be too stupid -and a show stopper. I’ll try to provoke it this weekend, too dark or frosty to replicate now.

I have a hard time trying my oldest controller since it started malfunctioning and is benched ever since.

The one I have is unlocked in fact (batt curr in the app anyway). QS says the SP is locked. But I was rather interested in other "changes". I can't confirm they changed the max phase current (I can get more than 400A at times). Anyway SilentEnduro said he tried every generation of votol with no success, so I'm confused. Worth trying though.

BTW what happened to the oldest one you have?
Top

My old controller started locking itself with random errors. Not driving related. I guess it could be program issues - i haven’t seen any other users screens with that early software or hardware, it hasn’t even got a version number and it had more settings that behaved erraticly.

Maybe the english votols were/are corrupt? I bet the chinese models have been around for a lot longer.
Last edited by larsb on Jan 26 2020 2:18am, edited 1 time in total.
Ride on!
Top

I think I need to retest what I checked during the day. This controller is really... strange. What I noticed: (my) controller does not apply the full power after it's started. It takes some time/wheel spin/throttle movements to reach the top performance from standstill. Today I did it like this: turned it on, stall tested (WOT+brake), measured some stuff, took pictures of the app, hopped on the bike, tested if/how much it wheelied and what I could subjectively feel, stopped the bike, reconnected the app, took pictures, turned it off. It came out it actually "pulls" better if I first warm it up. WTF? So I think I just need to go and test it on the spot where it lost its juice last time, like SilentEnduro did. In fact the more it's abused @ stall, the more it looses on the next start - it needs to... I don't know... cool down, forget about the stall condition?

And the last thing, very important to me. Listen up... I made tens of start/stops today testing out this stuff. I was so pissed off that the bike did not pull hard enough from standstill. It could barely wheelie - but it should, considering my gearing and over 400Nm on the wheel (in theory, based on what the Chinese say, did not measure it yet). So I started the app and put max or min values everywhere, like lvc 10V, all the start-torque options (for 3 wheelers [;) to 255, and activated the fw (3000) and the flux compensation 100, even though I didn't want to use it. Soft start on and off, saving it like 3 times to be sure. Ofc I tested (almost) each option before with no luck. Guess what. The bike started to do this (in sport mode): https://www.dropbox.com/s/zk0roimnrragd ... e.mp4?dl=0

So I started to revert param by param in the app. Do you know which sucker takes responsibility for such the change in motor's response from the start (in my case anyway)? Flux weakening compensation. I restored the config to what I had before and left fw comp = 100. It's a different bike from the standstill. Why? I have no idea. Note I set both fw values to 0 (in every mode), just left the fw comp set. I don't think they got the ipm motor covered and been using Id from 0rpms.

Though, as it does not change the "overheating" problem, but maybe the hit will not be such painful when it occurs? I will check it out probably during the weekend.

SilentEnduro, SilverLine, please do let us know if it changes anything in your setup. BTW my gearing is x7.33 atm.

Why is phase shift at 45? It’s 60 for me with the qs motor and i think that’s the correct value.

A large FW is the same as phase shift add on, you will get closer to 60 due to this.

If angle is not correct then this will affect all your tests
Ride on!
Top

You made me doubt myself so I went to check it out. It's no better, actually there are problems starting from 0rpm at times, you can feel it is not as smooth or the wheel barely moves depending on its position. I'd been using APT controller before. It had this really nice app with iq, ip reporting so I spent some time playing with it (lowest iq possible to make it spin, no fw, id 0). Different controller and setup but it was never 60 even from the factory iirc. But my motor had some issues from day 1 that needed to be addressed, actually you know what I mean. To make it more entertaining, my motor came with a loose axle nut which made the axle twist (together with hall sensors of course) in relation to the rotor, causing some magical things above certain amount of phase current passing thru the windings. Thank you qs motor. Anyway, as you've got the point, as always, I will need to think about it now.
Top

A large FW is the same as phase shift add on, you will get closer to 60 due to this.

Not sure if it makes a difference with the 2000w motor and em100, but mine is set at 60 hall shift angle and is also set to surface mount, not v type?
Top

Zeronest, vtype for sure but whether or not it changes anything in the controller's behaviour, I don't know.
Top

Now i remember, your video showed you could twist rotor on axle? That’s really not good, could you fix it? QS should replace your motor even if it was fixeable.

This can mean that your correct phase angle can be whatever value since the sensor wheel might be rotated vs rotor magnets
Last edited by larsb on Jan 23 2020 2:03am, edited 2 times in total.
Ride on!
Top

My controller was set at surface mount when it came, even though they promised to set it up to perfectly match the qs mid drive. I changed it to "v-type" so have never driven with "surface Mount" setting. What about you guys ?
Btw. Flux weakening was set to 80 also. Carrie told me, that this was the new default number, so i should not follow the manual in this regard (according to here, could be BS.)
Maybe we should try : set to "surface Mount" and flux weakening at 80. If i remember correctly, the first time i noticed the power loss, was with flux weakening at 64
Top

Great news @Bartosh, it give me some hope

The oldest Votol I have is waiting [spoiler alert!] Emaha2.0

I need some time to fit 138 to another frame, cause husky can handle hubmotor inside frame...
However I will not leave this controller without stress tests)))
https://www.youtube.com/c/silentenduro
http://fb.com/silentenduro
Top

Thanks!
How do you know it?
In the PCB I didn't see any label indicating which one is every wire.

Hi, I have a Chinese motorcycle which I customized with a 1500w motor and a votol em 45 box I had never seen before. I need to prepare it to run or take it to the maximum. I have 72v 40amp lithium bsteria. Finally I go ahead and mount a capacitor bank so that there is no voltage drop. But I do not know how to configure the box and I am willing to roll the engine or modify it thanks and I hope your help excuse my English is that I live in Cuba everything is difficult here greetings to all

Hi, I have a Chinese motorcycle which I customized with a 1500w motor and a votol em 45 box I had never seen before. I need to prepare it to run or take it to the maximum. I have 72v 40amp lithium bsteria. Finally I go ahead and mount a capacitor bank so that there is no voltage drop. But I do not know how to configure the box and I am willing to roll the engine or modify it thanks and I hope your help excuse my English is that I live in Cuba everything is difficult here greetings to all

Hi. I also live in Cuba.
Which motor do you have?
I have a contact to rewind the motor and give it a better characteristics.
I write in english, because it's an english forum.

I need to know if there's any difference configuring EM100 which comes with a gray plastic case, instead of the usual black case. 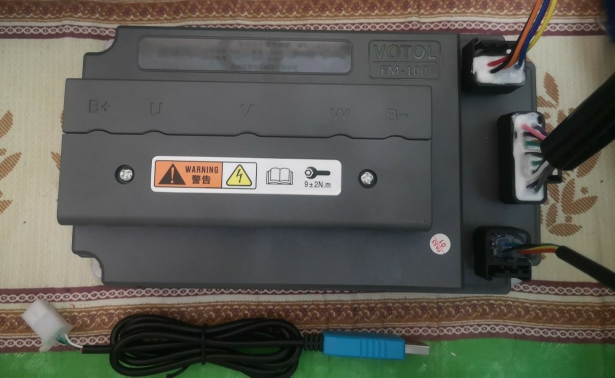 I did some drag races at the steepest road i have around here. It’s long enough to taste blood if you’re on a roadbike even when you’re fit

Couldn’t provoke any limiting by just going uphill and downhill a few times at full throttle, then i tried to go full throttle uphill with applied brakes, no problem but i was afraid to burn the motor. Belt skipped a few times so now it’s halfway destroyed..

Down again i started doing a drag race, belt skipped and i finally got a cutout. The power was down for maybe 3 seconds, then back again.

I am sure this wasn’t any time limit or temp limit, it was a ”controller out of control” protection cutout.
If this is the same as your issues (?) i’d say it’s unlikely to be possible to improve.

Battery was full, no BMS, no voltage protections.
300A busbar current. Possibly the chain makes it worse for you since there’s always some slack in the system so load peaks and voltage spikes can occur more. A tight chain tensioner could help if this is the case but would lower chain life.
Last edited by larsb on Jan 26 2020 10:05am, edited 2 times in total.
Ride on!
Top
Post Reply
687 posts